According to decisions of contributing Allies, such as Canada and Spain, the NATO Enhanced Forward Presence Battle Group in Latvia has been increased by deployment of additional troops, which includes increased  number of soldiers and military equipment. Latvia highly values that NATO’s Eastern flank is being strengthened in Latvia already today, and it must be continued, emphasized Prime Minister Krišjānis Kariņš on Tuesday 8 March, after the visit to the Ādaži Military Base.

K. Kariņš highlighted that Putin’s war on Ukraine has made NATO Allies more united, more determined and stronger than ever before, as demonstrated by today’s visit of NATO Secretary General Jens Stoltenberg, Prime Minister of Canada Justin Trudeau and Prime Minister of Spain Pedro Sánchez to the Ādaži Military Base. Allied commitment to Article 5 of the Washington Treaty is ironclad.

"Latvia is a part of the world’s largest and strongest military Alliance, where all 30 Allies stand shoulder to shoulder to defend each other. It should be recalled that Latvia is not only a consumer of collective security, but also a reliable and responsible Ally. We are investing and we will invest in security of our country and the whole Alliance by improving defence capabilities" said K. Kariņš. Prime Minister stressed that Latvia is currently investing more than 2 % of GDP in defence and the government has recently made a conceptual decision to increase the defence budget to 2.5 % of GDP in the next three years.

The Prime Minister also mentioned that the NATO Enhanced Forward Presence Battle Group and U.S. presence in Latvia is an important contribution to the reinforcement of Latvia’s defence capabilities. During the visit at the Adazi Military Base NATO Secretary General, the Prime Ministers of Canada and Spain and the President of Latvia observed elements of the ongoing military exercise and reassured importance of common military efforts. 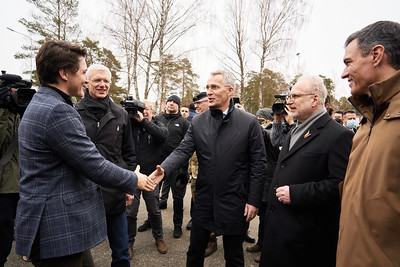 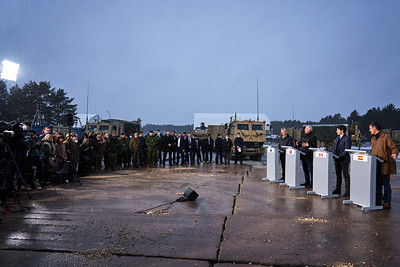