Wednesday, August 10, Prime Minister Krišjānis Kariņš, met with the US Secretary of Defence Lloyd Austin III to discuss bilateral cooperation between Latvia and the United States in the field of security and the opportunities to enhance it, the implementation of the decisions taken at the NATO Summit in Madrid, as well as the support to Ukraine in its fight against Russia’s military aggression.

The Prime Minister emphasized that the United States is a strategic partner of Latvia, with which the cooperation in the field of security is of paramount importance. K. Kariņš expressed gratitude to the United States for its long-standing support to the strengthening of security of Latvia and the Baltic region by ensuring the presence of US soldiers in Latvia since 2014 and close cooperation with the Latvian National Armed Forces in exercises as well as the  training of military specialists in the United States.

The officials also discussed the opportunities for strengthening of bilateral cooperation, including the acquisition of armaments – Latvia has purchased Black Hawk helicopters from the United States, and plans to purchase the High Mobility Artillery Rocket System (HIMARS). The Prime Minister and the US Secretary of Defence also discussed the decisions taken at the NATO Summit in Madrid to strengthen the Eastern flank.

The Prime Minister emphasized that Latvia is pursuing development of its defence capabilities, that will reinforce the security of Latvia and the Baltic region as a whole. The government and the Saeima have adopted a decision to increase the defence budget with the aim to reach a total financing of 2.5 % of GDP within three years. This will facilitate the acquisition of necessary armaments, the creation of a new military training area and the improvement of the army’s combat capabilities. Due consideration was also given to the current situation in Ukraine and the need to continue to provide all kinds of support to Ukraine in its fight against Russia’s military aggression.

K. Kariņš stated that Latvia will continue to provide all kinds of support to Ukraine in its fight against Russia’s military aggression – only the victory of Ukraine will stop the military ambitions of the Russian regime. 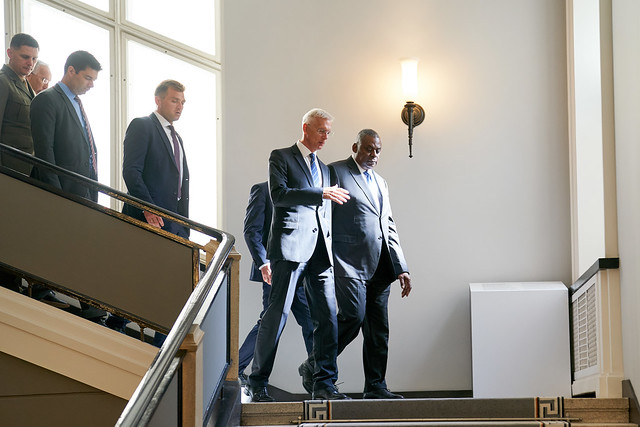