On Wednesday, August 15, Prime Minister Māris Kučinskis met in Riga with Prime Minister of Poland Mateusz Morawiecki. During the meeting, both parties discussed cooperation between Latvia and Poland by paying special attention to matters related to security.

Mr Kučinskis highly appreciated the significant contribution of Poland in the security of the Baltic States by participating in the Canadian-led NATO battlegroup in Latvia and its readiness to continue participation in enhanced NATO presence in Latvia in the next years. During the meeting, the Latvian Prime Minister underlined the close cooperation with Poland in the NATO StratCom Excellence Centre and the regular participation of Poland in patrolling the air space over the Baltic States. Mr Morawiecki visited Latvia on the day of Polish army and within the framework of his visit also met the soldiers of his country serving in Ādaži.

During the meeting, was discussed cooperation with Poland in significant regional transport and energy infrastructure projects such as Rail Baltica and synchronisation of electricity networks of the Baltic States with the continental Europe. Mr Kučinskis expressed his satisfaction with the progress in implementation of Rail Baltica project and positively evaluated the fact that it has been possible to move from planning to designing phase. Prime Minister noted that in near future it is important to make agreement on the synchronisation model of electric networks of the Baltic States with the continental Europe by choosing the best scenario from the viewpoint of safety and costs.

When meeting with the Prime Minister of Poland, an exchange of opinions was made on progress in talks on the next EU multi-annual budget after 2020.

"Latvia will stand up for adequate financing for Cohesion Policy and for Common Agricultural Policy. It is also important for us to ensure sufficient CEF financing for the major transport and energy projects – Rail Baltica and synchronisation of electric networks of the Baltic States with the continental Europe," said Mr Kučinskis.

This year, Latvia and Poland celebrate centenary anniversaries of establishment and regaining of statehood. Poland is among the leading external trade partners of Latvia. In 2017, the mutual goods trade between Latvia and Poland increased by 8.5%. 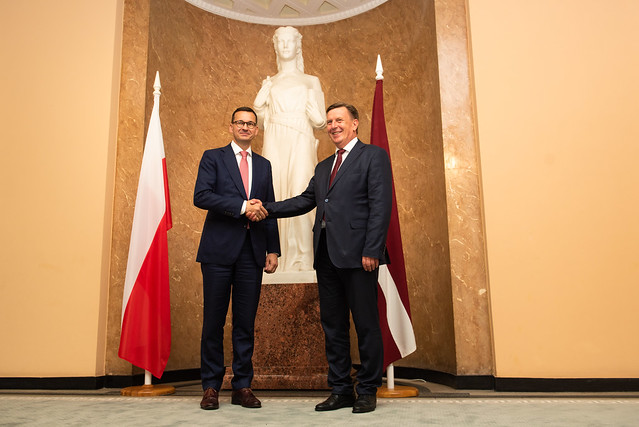 The website has been developed in conformity with the conditions of the Grant Agreement of the European Commission No. ECFIN-105-2013-SI2.651674 "Communication Activities Relating to the Euro Changeover in Latvia".
A reference to the State Chancellery of the Republic of Latvia is compulsory when the document is republished
Last updates in page 05.08.2020
© Valsts kanceleja, 2014