On Thursday 14 June, Prime Minister Māris Kučinskis met with Sumitra Mahajan, Speaker of the House of People (Lok Sabha) of the Parliament of India and with a parliamentary delegation.

During the meeting with the parliamentary delegation, the officials highly appreciated the active political dialogue with India, both bilaterally and within the European Union. M.Kučinskis highlighted the excellent relations between Latvia and India with a significant potential for cooperation in the fields of economic cooperation, education and culture.

“We will be pleased to continue work with India on the Cooperation Program in the field of higher education and the Agreement on the Exchange of Students, Researchers and Academic Staff. The signing of these agreements would facilitate the cooperation in the field of education,” said M. Kučinskis.

Prospects for future economic cooperation between Latvia and India were also discussed by offering the possibility to develop transit services and investment opportunities in port terminals and logistics centres of Latvia.

Since the opening of the Latvian Embassy in New Delhi in 2014, the relations between Latvia and India have become closer. The possibilities for co-operation are expanding, both bilaterally and in international organizations. M. Kučinskis expressed hope that India will soon open an embassy in Rīga. It would contribute to the strengthening of relations between the countries and consular work.

The visit of Sumitra Mahajan, Speaker of the House of People of the Indian Parliament, to Latvia takes place half a year after the visit of Prime Minister M. Kučinskis to India. In November 2017, the Prime Minister and a delegation of Latvian businessmen paid a working visit to India and met with India's President Ram Nath Kovind and Prime Minister Narendra Modi, took part in the opening of the World Food India and visited the Port of Mumbai. 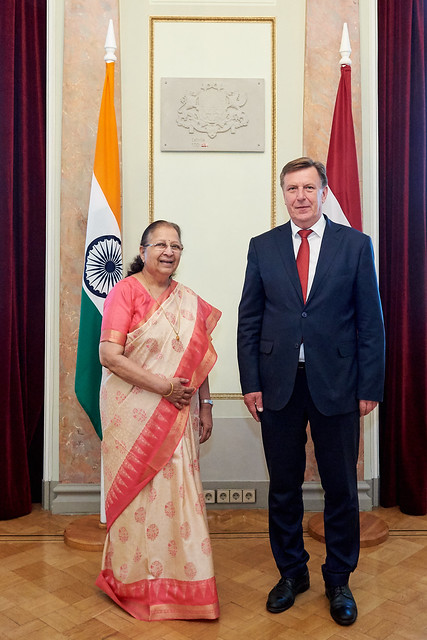 The website has been developed in conformity with the conditions of the Grant Agreement of the European Commission No. ECFIN-105-2013-SI2.651674 "Communication Activities Relating to the Euro Changeover in Latvia".
A reference to the State Chancellery of the Republic of Latvia is compulsory when the document is republished
Last updates in page 03.06.2020
© Valsts kanceleja, 2014