M. Kučinskis: It is important for Latvia and Estonia to cooperate on various important issues in a constructive manner

On Tuesday, August 21, the governments of both countries met in Riga in order to discuss issues of importance for Latvia and Estonia. This meeting was held in commemoration of the centenary of the founding of both countries and was aimed at strengthening the close friendship between the two similar-minded countries and promoting constructive cooperation on mutually important issues.

Issues related to the regional cooperation between Latvia and Estonia and strengthening of the security in the region, as well as current issues of the European Union (EU) – cooperation on the implementation of regional energy and transport infrastructure projects, the development of digital connectivity, and topics on the promotion of growth and convergence in the EU were discussed during the working sessions of the joint meeting of the two governments, chaired by the Prime Minister of the Republic of Latvia Māris Kučinskis and the Prime Minister of the Republic of Estonia Jüri Ratas.

In addressing the ministers of both countries, M. Kučinskis expressed satisfaction to the co-chairmen of the Estonian-Latvian Intergovernmental Commission for the work done to ensure that our citizens could live on both sides of the border without unnecessary obstacles.

“At the same time, much more needs to be done to ensure better access to healthcare and education services or even simpler things – to ensure that people do not have to wait so long for a train or bus when transferring. Therefore, the next meeting of the Estonian-Latvian Intergovernmental Commission in October must be carefully prepared for,” said the Prime Minister.

He also pointed to the need for the Baltic States to cooperate in the field of energy.

“I expect that in the near future we will agree with our regional partners on the scenario of synchronization of the Baltic power grids with Europe through Poland. The goal is to choose the best scenario in terms of security and costs,” said M. Kučinskis.

Attention was also drawn to the EU Multiannual Budget.

“We are in the same boat as regards the negotiations on the EU Multiannual Budget after 2020. We need to work to achieve a positive outcome for us in the negotiations that would help to align the standards of living in Europe, would meet the interests of our farmers, and develop the energy, transport and digital connectivity of the region,” the Prime Minister stressed.

At the end of the meeting, the Joint Statement of the governments of the two countries was adopted, which addresses the issues of regional cooperation between Latvia and Estonia, strengthening of security in the region, strategic communication, regional energy infrastructure projects, regional transport infrastructure projects, growth and convergence, as well as digital connectivity.

After the meeting of both governments, a book-giving ceremony was held, during which the representatives of the Estonian government had the opportunity to donate books to the People's Bookshelf of the National Library of Latvia.

Language Award of Latvian and Estonian Foreign Ministries was awarded at the end of the ceremony.

Latvia and Estonia have a very active political dialogue, share common interests in the Baltic Sea region, and have a close partnership within the EU and NATO. Sectoral ministries, local governments, entrepreneurs, and non-governmental organizations of the two countries have developed close cooperation in various fields. 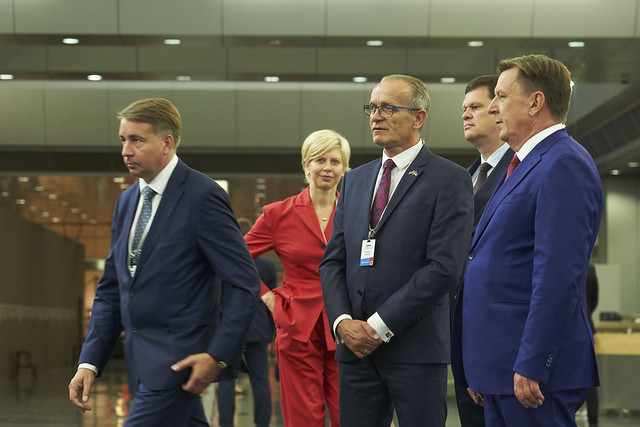 The website has been developed in conformity with the conditions of the Grant Agreement of the European Commission No. ECFIN-105-2013-SI2.651674 "Communication Activities Relating to the Euro Changeover in Latvia".
A reference to the State Chancellery of the Republic of Latvia is compulsory when the document is republished
Last updates in page 29.05.2020
© Valsts kanceleja, 2014