Kariņš: Confidence in a close and positive development of future relations between Latvia and the United States

At the conclusion of the working visit to the United States, Prime Minister Krišjānis Kariņš notes that the representatives of the US presidential administration and the Congress welcome Latvia’s progress in strengthening both national defence capabilities and improvement of the business and investment environment.

“During negotiations, the U.S. officials, businessmen, experts of think-tanks and journalists unanimously welcomed the progress of our country in implementing ‘capital improvements’ to the supervision of the financial sector, the ongoing administrative and territorial reform, changes to the education system, and the strengthening of defence capabilities. Our relationship is constantly evolving in a positive direction, and I received assurances that the United States will further support our security. U.S. businessmen also appreciate Latvia's progress in evaluating new investment opportunities in our country,” said K. Kariņš.

In New York, K.Kariņš addressed entrepreneurs at the event hosted by the Baltic - American and European - American Chambers of Commerce, delivered a speech at the oldest and most influential New York club “Union Club”, met with João Vale de Ameida, Ambassador of the European Union to the United Nations, and attended the permanent mission of the Republic of Latvia to the United Nations. K. Kariņš gave interviews to the media representatives, including Steve Forbes for his weekly podcast “What's Ahead”, in New York. The Prime Minister met with representatives of the Latvian diaspora both in Washington and New York. During the meetings, K.Kariņš highlighted the great contribution of the diaspora to the preservation of Latvian culture, folk wisdom and to the strengthening of the statehood of our country.

Discussion of the Prime Minister and Steve Forbes in the weekly podcast “What’s Ahead”.

Photos from the Prime Minister’s working visit to the USA. 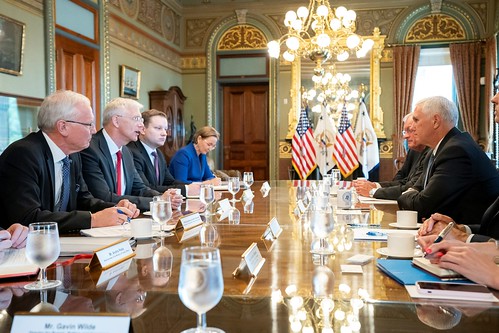 The website has been developed in conformity with the conditions of the Grant Agreement of the European Commission No. ECFIN-105-2013-SI2.651674 "Communication Activities Relating to the Euro Changeover in Latvia".
A reference to the State Chancellery of the Republic of Latvia is compulsory when the document is republished
Last updates in page 27.05.2020
© Valsts kanceleja, 2014