Kariņš: Baltic States continue to cooperate closely in the implementation of regional projects

On 7 February, Prime Minister Krišjānis Kariņš participated in a meeting of the Baltic Council of Ministers, where, together with the Prime Ministers of Estonia and Lithuania, confirmed that there is close cooperation between the three Baltic States in the implementation of the projects that are of major importance for the region.

At a press conference held following the Council meeting, Prime Minister K.Kariņš stressed that the synchronisation with the European electricity market is a priority for all three Baltic States in the field of energy.

“Financing agreements have been reached, infrastructure facilities are built in line with the time and budget framework. We continue to monitor this project in cooperation with experts, to ensure that it is implemented as planned,” explains K.Kariņš.

In addition, the Prime Minister has obtained assurance in negotiations with the Heads of Government of Estonia and Lithuania that all countries are determined to advance rapidly towards the implementation of the Rail Baltica project.

“Each country has a different approach to starting the construction – Lithuania is moving forward with rail construction, Estonia – with a viaduct, while Latvia is starting with the challenging construction of the railway infrastructure in Rīga and Riga airport,” the project's development in the Baltic States is characterised by K.Kariņš.

The Prime Minister also points out to challenges relating to national security, procurement procedure, ownership structure and other aspects.

“We agreed with our ministers for transport, who were  present, that further efforts are needed to remove the project management barriers to ensure that the Rail Baltica project is as successful and predictable as the synchronisation with the European electricity market”. The Prime Ministers of the Baltic States will meet at the end of March in Vilnius to assess the progress in the railway infrastructure construction project.

The Baltic Prime Ministers and Johannes Hahn,  European Union's (EU) Budget and Administration Commissioner discussed the progress in negotiations on the EU's multiannual budget 2021-2027. K.Kariņš noted that there is still much to be done to reach an agreement before the European Council meeting on 20 February. 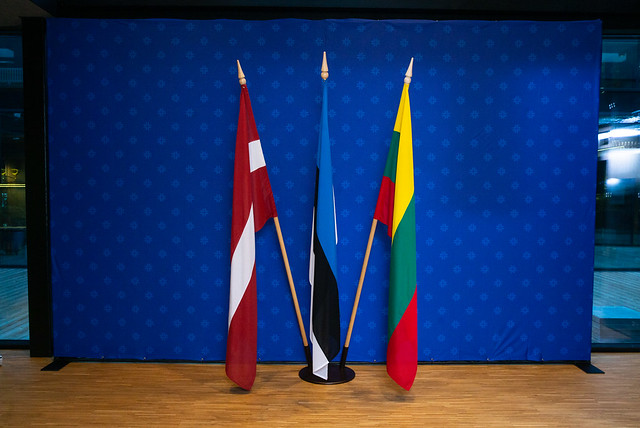 The website has been developed in conformity with the conditions of the Grant Agreement of the European Commission No. ECFIN-105-2013-SI2.651674 "Communication Activities Relating to the Euro Changeover in Latvia".
A reference to the State Chancellery of the Republic of Latvia is compulsory when the document is republished
Last updates in page 06.04.2020
© Valsts kanceleja, 2014