In a conversation with the US congressional delegation, the Prime Minister emphasizes the importance of a long-term partnership between the Baltic States and the US

During the meeting, the Prime Minister welcomed the unanimous support of the United States Congress to Latvia and the Baltic States as a whole, as evidenced both in resolutions and approvals of funding for strengthening the security of the Baltic States, as well as during the regular visits of senators, congressmen and their advisers to Latvia.

The US support for Latvia's security is indispensable. The commitment of the Unites States to help improve defence capabilities, which was made under the declaration of the United States – Baltic Summit, was highly appreciated. The Prime Minister emphasized that Latvia fulfils its commitments with regard to the strengthening of defence capabilities of the NATO Alliance with a full responsibility by allocating 2% of its gross domestic product to defence, and by participating in international military missions in Afghanistan and Iraq.

As regards the preparations for the NATO Summit in Brussels, the Prime Minister stressed that it should demonstrate the transatlantic unity. Discussions of the summit should focus on collective defence through the continued implementation of decisions of the Wales and Warsaw summits, and setting of future goals. As far as the risks of hybrid threats are concerned, it was pointed out that Latvia is working with social networks in order to be able to identify and prevent the possible Russia’s influence on the upcoming Saeima elections. The NATO Strategic Communications Centre places special emphasis on the monitoring of social networks and analyses coordinated information campaigns. The representatives of the Congress are paying the visit to Latvia within the broader regional visit, during which they also visit Sweden, Denmark and Finland. 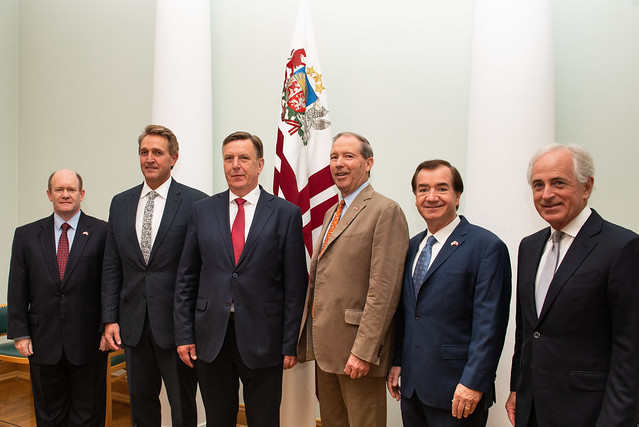 The website has been developed in conformity with the conditions of the Grant Agreement of the European Commission No. ECFIN-105-2013-SI2.651674 "Communication Activities Relating to the Euro Changeover in Latvia".
A reference to the State Chancellery of the Republic of Latvia is compulsory when the document is republished
Last updates in page 28.05.2020
© Valsts kanceleja, 2014